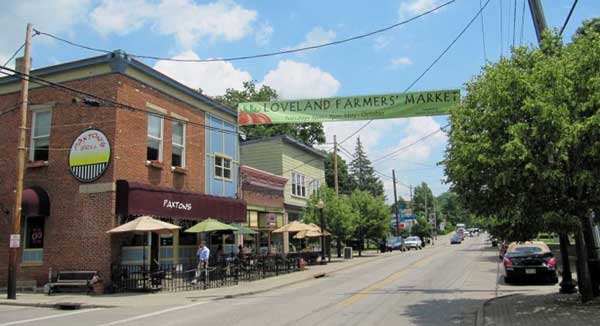 Looking for Heating, Cooling, or Indoor Air Quality Services in Loveland, Ohio? Fairfield-Hamilton Heating & Cooling services Loveland, OH (and surrounding communities) with a superior level of HVAC services and customer support that our competitors can’t match. We strive to make sure each and every customer has a Five Star Experience ‒ each and every time, 100% Satisfaction Guaranteed!

Known famously as the “Sweetheart of Ohio,” the City of Loveland is located in three counties in southwestern Ohio: Warren, Clermont, and Hamilton counties. With a population of more than 13,100 people, Loveland is about 15 miles northeast of Cincinnati. The former railroad town is now a major stop on the Little Miami Scenic Trail. Despite the community’s embracing of the “love” concept, the city actually derives its name from James Loveland, a merchant and early resident.

Loveland was incorporated as a village in 1876; in 1961 it became a chartered city after seeing a population spike during the 1950s. Because many of the town’s early inhabitants were the summer homes of wealthy people, Loveland was considered a resort town and had the nickname “Little Switzerland of the Miami Valley” in the early years. The skeleton of a mastodon (along with several prehistoric stone tools) were found in a gravel pit in Loveland in 1886. Seventeen years before prohibition, in 1903, Loveland decided to become a dry village as the town was a stronghold in the Temperance movement here in Ohio.

Throughout the decades, Loveland has been prone to flooding because of its proximity to the Little Miami River; one of the worst floods being the Ohio Flood of March 1913.

During the 1920s, the Cincinnati Enquirer offered customers a free plot of land in Loveland as part of a promotion to sell annual subscriptions. The historic Loveland Castle was built on several of these plots.

In 2013, Ohio Magazine named Loveland as the state’s “Best Hometown.”

Tourism drawn in by the Loveland Bike Trail accounts for a substantial part of downtown Loveland’s economy. There is a light industry at the Loveland Commerce Park in the northwestern corner of the city. Companies headquartered in Loveland include Dos Madres Press and Rozzi Fireworks.