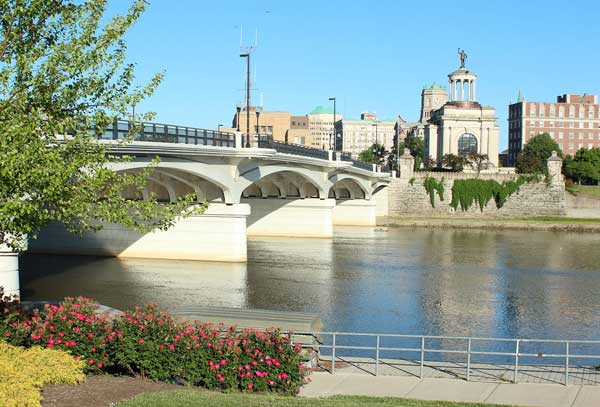 Looking for Heating, Cooling, or Indoor Air Quality services in Hamilton, Ohio? Fairfield-Hamilton Heating & Cooling services Hamilton, OH (and surrounding communities) with a superior level of HVAC services and customer support that our competitors can’t match. We strive to make sure each and every customer has a Five Star Experience ‒ each and every time, 100% Satisfaction Guaranteed!

Located about 20 miles north of Cincinnati, the City of Hamilton has a population of more than 62,000 people. It is the county seat of Butler County. Since 2000, Hamilton has been known as the “City of Sculpture” because of the city’s movement to revitalize through the arts. The movement has drawn a variety of sculpture installations to the city, which established the Pyramid Hill Sculpture Park. Today, Hamilton has three National Historic Districts designations, which include Rossville, German Village and Dayton Lane.

Named in honor of Alexander Hamilton, the city’s first name was Fort Hamilton. It was built in the fall of 1791 by the governor of the Northwest Territory, who was Gen. Arthur St. Clair at the time, as a supply station for troops during the Northwest Indian War. It was abandoned as a fort after the signing of the Treaty of Greenville in 1796. By 1794, the settlement springing up around the fort was platted as Fairfield.  On Sept. 17, 1859, Abraham Lincoln visited the city at Hamilton Station and gave a famous speech describing the area as “the garden spot of the world.” Relatively unknown at the time, it was during this same campaign that Lincoln was first mentioned as a viable presidential candidate.

By the mid 1800s, Hamilton began to flourish in its manufacturing. Some of the products were usually machines and other types of equipment involved in the processing of the region’s farming produce like steam engines, reapers, threshers and hay cutters, among a long list of other products By the early 1800s, the town of Hamilton had become a heavy-manufacturing base for safes and vaults, paper, locomotives, machine tools, cans for vegetables, paper manufacturing machinery, switches and frogs for the railroad industry, as well as diesel and steam engines, printing presses, automobile components and foundry products.

During both of the world wars, Hamilton factories, like a lot of manufacturing communities, made war material for the military. The whole Great Miami River valley area, where Hamilton was located, had grown into an industrial giant.